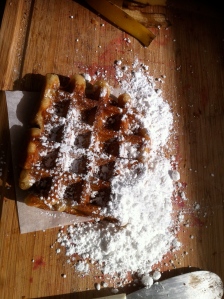 Holidays were always such a treat when we worked the “9-5”.

40 hours a week with 8 hour days. 90% of the time off I took was “PTO” (Paid Time Off) – an acronym, being a small business owner, we are no longer familiar with. Thanksgiving and Christmas were especially happy moments where you not only were able to shut down, you were expected to. While making waffles in our little shop has its benefits, it also has its little sacrifices. As traffic builds, shops get busier as kids get out of school, and folks take their PTO; we start to work over time.

I’ve learned that while folks see Black Friday as a day where businesses go “black” (gain a profit) instead of the “red”(at a loss); it’s really just a story that we tell ourselves, when in actuality the first time “Black Friday” was used was back in 1869 during a financial crisis, and then again in the 1950’s when Philadelphia held an annual Army-Navy Football game the day after Thanksgiving. The game would cause so much conflict, the police had to work over time to control crime and crowds. Then later, the shopping market swooped in and put a more positive spin on the project. Hence we have, Black Friday, a day where all retail/food businesses hope to go “black”. (source: the history channel)

We hope this as well in our little waffle world but there is still some truth to the History. With Black Friday creeping into Thanksgiving, so many of us are working around the clock, making preparation for all you PTO’ers. We admit, were a little jealous but also thankful that there’s still some of us out there that can shut down and go home; where your not expected to serve, have amazing sales, work overtime, and just downright be perfect.

So whether your shopping, eating, cooking, watching the game, spending time with family, ditching dinner to get in line, getting paid to do so, or working around the clock to increase your business sales; let’s just have a moment of gratefulness. There are always those with less and always those with more. I think its a step in the right direction to first be thankful for what we already have.